1.  Excerpt from my review as posted on Hikingupward.com:

“Hiked 13-15 Jan 2012, with Obsessive Compulsive Backpackers (meetup.com).  Arrived at trail head Friday night about 1130pm, it was 17F with wind gusting to probably 25-30mph, blowing over tents during set up.  Got down to 14F. There had been snow earlier that week so there was about 1″ in the trail and forest where the sun didn’t hit.  Trail was in very good shape, the snow was hard and crunched, footing was great.  Trail extremely well marked (AT of course).  Spring was flowing fast and very easily found, there is a sign denoting the trail to spring directly in front of the shelter. Six of us slept in the shelter, 1 in a tent.  Saw only 1 bear print near shelter.  No issues with small critters or bears, didn’t see or hear anything.  On the way to the shelter the trail crosses a large creek, a good source of water or camping.  The views as described here really great, just about .5 mile up the trail head from the parking lot.  It was really too cold with the wind chill to stop for very long on the way to the shelter.  Note:  everyone’s camel-back tubes froze making them useless, recommend substituting a canteen in this weather.”

2.  Jimmy (aka – “biscuit”) made sausage and scrambled egg biscuits saturday morning for the entire group again!  This guy is sooo my hero!

3. Squirrel had a tent pole break Friday night so had to use a spare tent Biscuit brought.  It was 17F, dark, and a huge wind, so the wind chill had to be in the single digits, it was really very cold.  My tent blew over while I was trying to stake it, and in the process, I lost a peg, I only use 2 so I was pretty worried, had to use one of my walking poles to hold down the front, then I couldn’t get the one peg in the frozen ground and had to move.  During this time my tent and pole bags blew away into the dark, Sherpa found them later, thankfully.  Next morning I made coffee under my vestibule and ate bagels and cream cheese, then had second breakfast courtesy Biscuit.  Unfortunately, Sherpa got sick that night and had to bail, but she met up with us on Sunday at the trail head and for lunch.

4.  Not sure why, but either Herc or Biscuit wound up carrying Squirrel’s borrowed tent the 7.5 miles over the snow and to the shelter.  On the way back I divided up the tent into thirds, so between myself, Herc and Biscuit the load was shared (I’m still not sure why Squirrel couldn’t have carried it, or just bunked in somebody Else’s tent or just stay in the shelter, as we all eventually did).

The scenery was terrific, the views from the ridges (no leaves) and the forests with snow, at times very quiet and tranquil.

5.  We tried to make a fire, got it going, buy try was we did, the wood was just too wet to maintain.  So after a while we just gave up and went back to standing around shivering.  We starting cooking about an hour before sunset and then everyone called it a day between 6-7pm.

6.  John from Lynchburg, was already at the campsite when we arrived.  His first hike with OCB.  He helped people set up during  the freezing wind and provided great music from his iphone speakers.  He was a great addition to the hike and really good sport!  Hope to see him on future hikes.

7.  We were also met by member Mark, whom I’d never met.  He had been hiking since Thursday, hiked 10 miles on Saturday and joined us at the shelter just around the time we started arriving.

8.  On the hike in, about half way, I noted that something in my pack was leaking and the seat of my pants was soaked,  this was fairly alarming considering the weather (duh, here’s you sign!), I had no spare pants and was already wearing my thermals, YIKES!  So I kept thinking about, ok, this expensive nylon shit is supposed to be wicked away by the warmth I’m generating, it better fucking happen or I’m toast tonight!  I hoped I would have enough time to dry this shit out, man I WAS PISSED! Well, good news, by the time I got in my bag, it was mostly gone or at least warm, so any freezing that time, wasn’t due to that.  When I was cleaning up my stuff today (Monday), I noticed a pin hole in my camel back that was leaking when the water started to thaw when it was inside my pack.  When I discovered my wet butt, I took both my camel back and canteen out of my pack and carried them outside, but by then the camel back had already started re-freezing, so I didn’t notice the leak.

9.  That night, I poured boiling water into my canteen, put that in a double zip-lock, and into the foot of my bag, I know it was a risk, but it worked great, really providing great heat, and kept my feet warm all night.  I still need to solve my pillow situation, since I’m a side sleeper; what I was using, a stuff sack, kept sliding around, so I had to keep reaching out of my bag to adjust it, letting in one icy blast of air in after another.

10. I cooked Betty Crocker Cheesy Scalloped Potatoes in the jetboil, 13min of cooking.  Came out fantastic, but a nightmare to clean.  Had to boil water and scrub twice.  In the AM, warmed my fuel canister in my bag for a while, but it cooled off for round two of coffee and barely functioned. 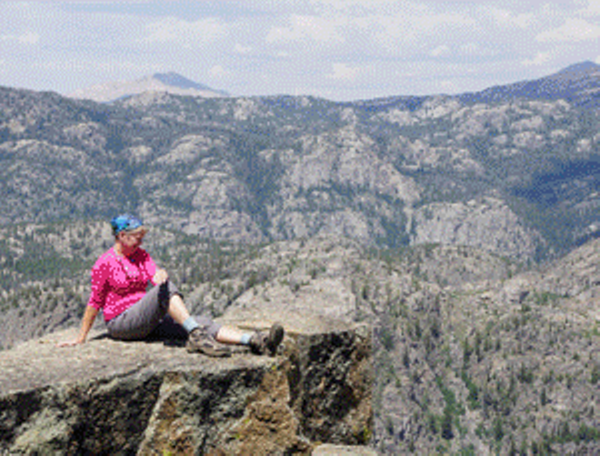 “Thousands of tired, nerve-shaken, over-civilized people are beginning to find out that going to the mountains is going home; that wildness is a necessity; and that mountain p…

Check out this Meetup Group →

12.  You can check out some favorite photos from years gone by at

the folder “Misc Hikes and Climbs” is pretty neat.