I don’t normally blog about my monthly weekend backpacks but this was special for stress testing rain equipment in the cold and for the 3 river crossings!  My next post will be on my new phil-osophy on staying dry in pouring rain.

It’s not supposed to rain in the Blue Ridge, especially this time of year.  We (being myself, Buff, Pyro, and Bones from Obsessive Compulsive Backpackers Meetup) were looking forward to our first snow hike of the season, but warm weather had melted what little snow there was and as a bonus, a predicted front brought in a torrential downpour on our day 2.

We parked at the Graves Mill trail head parking lot, and with a late start we had about 4 hrs of daylight to make the days first objective, a flat spot next to the Rapidan River, just past the ‘Rapidan camp’ (this is a series of cabins that you can rent out on the road to camp Hoover.  The Marine guards for the presidential visits to camp Hoover were housed there).

But first we had to negotiate a crossing of the Staunton River and Rapidan River.  The first one went ‘ok’, we were able to barely hop across on the rocks and had no problems.  The second river was a little higher, so those of us who are vertically challenged, had a series of long jumps ahead of us which left us looking for an alternative crossing.  After spending a little bit of time searching to no avail, we wound up just sucking it up and taking off our boots and socks fording barefoot.  The river at that point had a few sections 1 1/2 – 2 feet deep and had a pretty good current, so it was a good opportunity ‘stream crossing lessons’.  Once across, we used bandanas to dry our feet off.  The good thing about the water being freezing cold is that the numbing effect sort of negated the pain of sharp rocks on bare feet. 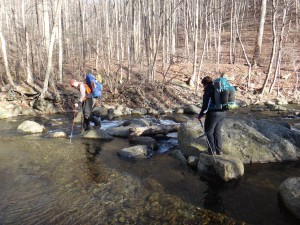 After a few miles or so we happened upon a  junction of the trail, a fire road going up the mountain, and a gravel road coming in from the south-east leading to the Rapidan Camp.  There was a gravel parking lot for visitors to the Rapidan Wildlife Management area and a natural flat area with a not-so-old fire ring.  After some discussion about the pro and cons of stealth camping there (we were in the wildlife management area and not exactly in the park (SNP) and the fact it would be dark soon), we decided to go for it and camp there.

Despite the many pick up trucks passing on the gravel road, who we assumed were hunter who had to vacate the area before dusk, we didn’t have any issues with any ‘authorities’.

We had a great campfire and I strung the Christmas Lights on my tent that Buff and Pyro had carried. 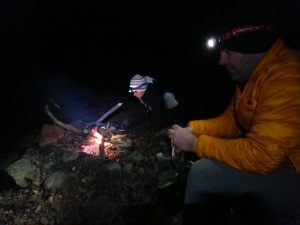 The rain started in the middle of the night and didn’t stop at sunrise, it just got heavier.  Soooo….we had every backpackers worst nightmare (no not a bear in camp), we had to get up and break camp in a driving rain!  I had brought my REI quarter dome and had a great breakfast, cooking under my vestibule  (or my tent’s ‘foyer’ as Buff and Pyro like to call it!)

Then it was out of the tent into the driving rain and packing up.  As a bonus, the rain was kicking up mud onto everything in contact with the ground, adding to the soaking wet tents that had to be packed up.

And off we went!  We decided to take an alternative route back to the cars to avoid the 2 river crossings, the Rapidan, which we camped near had risen quite a bit.  So we hiked up the mountain on the fire road heading up towards the Sag and the junction of the Jones Mountain Trail.  We found on the USGS topo map a trail that formed a cut-off back down to the Staunton river Trail which would negate have to hike up to the Sag, and taking the Jones Mountain Trail to the Staunton River Trail.

Only problem was, that trail was not on the PATC SNP map so it was anybody’s guess if it was still there.  As it turned out, the trail intersection was not marked and we walked right by it.  Fortunately we were using the Backcountry Navigator GPS app, with the USGS map tiles pre-loaded and were able to double back, only 100′ or so, and found the trail.

The trail looked unmaintained at the start but well defined, but after about 200 meters, it started fading out and disappearing altogether, we knew it followed a creek to the Staunton River so we had to basically bushwacked down the mountain for a while, fortunately the app still received GPS signals and we knew we were in the trail’s vicinity, more or less.

We were able to hit the Staunton River and Staunton River Trail at the exact spot of the trail crossing, but as luck would have it, the river was very much swollen over. We searched, pretty much in vain, for a rock crossing.  However, Bones, who should be renamed “longshanks”, managed a daring rock hop leap and crossed (luckily) without falling in!

The rest of us short legged folks, have no alternative and being already soaked (did I mentioned it was still pouring?) said ‘fuck it’ and just plowed on through.  Swollen river crossing lesson number 3!  We’ll, it was touch and go, but we managed it ok. 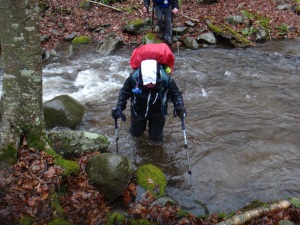 After the crossing, it was a short scramble up the bank, finding the main trail and straight on, easy walk, to the car.

The rain let up and had stopped on the way back to the parking lot, but, as again luck would have it, started raining when we got the truck (SHIT) so we had to hold up umbrellas for each other to change into dry clothes.

It was then off to the Mellow Mushroom in Charlottesville and the post hike celebratory feast!