Muddog saved my life, but we had to leave him behind.

Well, sort of. I hate wet feet. I don’t mind so much hiking in wet feet, but hanging around camp in wet feet just sucks. I’m not complaining, too much anyway, if you hike in Dolly Sods you’re bound to get your feet wet sooner or later.

The forecast was for a 40-60% chance of showers, with some thunder boomers. We had about 15 people signed up for the trip, so it was hard to enforce my personal rule of avoiding these local trips with a rain forecast above 50%.

I know the ‘Sods’ is a wilderness area with a limit of 10 per group, but experience has shown that lots of folks sign up and lots of folks drop out closer to the day of the hike. And wouldn’t you know it, right on schedule folks started to change their RSVP, the polite ones anyway. We still had 4 no-shows, very rude. In the end we had a group of 6, so no wilderness rules broken.

Back to the ‘wet’. We left the Tidewater area of VA around noon, stopped to eat in Harrisonburg, Va, and made it to the trail head about 7pm. The ladies hit the trail and Mr. Clean Jeans and I shuttled the cars about 5 miles south of the TH to save a couple of hours on the last day.

By the time we hit the trail it was close to 9pm. Right from the start we noticed that the normally high ground, which was the remnants of some old road, was completely and thoroughly soaked, the Sods had some big rain earlier that day and week. But we had partly cloudy skies to camp and a great sunset.

Muddog was already at camp and there was a nice fire in spite of all the wood being soaked.

The naturally occurring phosphates had foamed up in parts of the creek, looking like something from factory runoff. And the water was still ‘reddish’ after being filtered, typical Dolly Sods.

No rain that night or the next morning as we took in the highlands of the Sods and marched to that nights camp along a tributary branch of Red Creek (Red because the water is almost red, brownish-red) 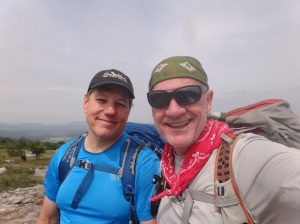 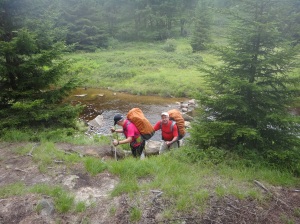 We got to camp, set up tents, collected firewood – or fire brush in this case, got a nice fire going, and then it started raining. An hour and a half later, it stops, sort of, and we can get out of our tents. I had a good nap and listened to podcasts for a while.

The fire re-starts pretty easily and we start cooking somewhere between 5-6.

The rain never really stopped, it just slowed way down, where you can’t tell if it’s sprinkling or just dripping from the trees.

Now to part where Muddog saves my life.

My feet are pretty much soaked when we get to camp, I wasn’t carrying in spare shoes, I mean, like, who in their right mind would?

In the past I have carried large zip-locks to cover dry socks so I can put my wet boots back on, but for some reason (old age?) I didn’t throw any in my pack this time, so I was doomed to suffer in cold, wet, smelling socks around camp.

As I was lamenting around the campfire – there was no crying dammit! – Muddog saved my life by giving me 2 giant zip-locks so I could have warm and dry feet!! I feel a tear coming on just thinking about it! My hero! 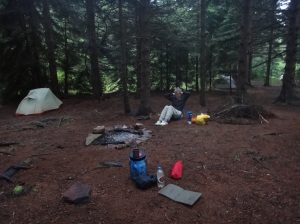 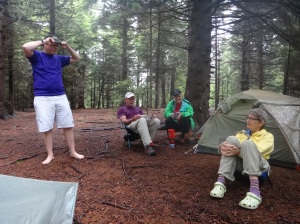 It was with great sadness that we had to leave him behind. Well almost. As the rain continued on and off, the discussion turned to the fact there was not going to be any swimming on Red Creek with lots of basking in the sunshine and that maybe we should consider hiking out and getting a good hot meal and homemade pie…not a bad idea.

In true 4th of July fashion, a vote was taken and pie won. Muddog was not being as wimpy as the rest of us, and was considering pressing on, or slogging on, in the mud, for a few more days, so leave him behind we would!

In the end Muddog bowed to group pressure or the call of the pie and joined us for an early feast at the Gateway restaurant on Hwy 33.

The slog out was almost as epic as the Sods get.

Ankle deep mud, ankle deep bogs, several creek crossings in pouring rain, and the sun breaking out of the heavens just as we clear the woods!

What’s not to love?

PS. Sort of training for the JMT in August, my pack weighed-in at 25lbs, including a bear canister (2.5lbs), my 2-legged chair (1.1lbs), platypus 4liter gravity filter (.8lbs), and 4 meals. Including one-liter of water. Not bad.

I could cut most of the weight of the filter by using my steri-pen or aqua mira, but I’m just effing lazy! I would rather filter my daily 4 liters all at once that stand there and do 1 liter at a time, plus my ‘clean bag’ could double as a water bladder with a sip tube, if I wanted to do that.

There, I said it.