Exhausted in a hut, somewhere in the Swiss Alps

Backpacking – Illegally- and exhausted, somewhere in a valley in the German Alps.  Winter time so you can pitch you tent near a hut and eat on the porch!

Exhausted after unable to pitch tent on the trail, somewhere on a hillside on the German-Austria border

Too exhausted to bend over and pick up ski pole after finally finding hut in a white out, somewhere very high up on a Swiss Glacier.

Where is the goddamn trail! WTF am I doing here?… preparing to be totally exhausted and breaking into a high altitude shepards’ hut for refuge, somewhere in Austria.

Badly out of shape, unable to sleep in hut, unable to continue, on failed attempt on the Duforspitze, Zermatt, Switzerland

Backpacking (illegally) in a forest in the German Alps, trying to crawl under a tree, exhausting

Exhausted, in the rain, on the AT, in New Hampshire.

Exhausted, once again, by the AT in New Hampshire!

This is the F***ing AT in New Hampshire, and I wasn’t in shape for it.  Another trip, another beating! 🙂

Looking pretty beat (and wet) after reaching top of Mt Washington, New Hampshire.  In just a few hours both my legs would be cramping, and of course, I would be exhausted!

It’s raining now at my house. So I did what any backpacker does, I started anguishing about setting up my tent in the rain and minimizing my discomfort.

My current tent is the REI quarter dome (3lbs 14 oz, without stuff sack).  I’ve watched my fellow hikers from Obsessive Compulsive Backpackers   set up their hubba hubba’s and brag that if it rains they can just set up their rain flys and crawl in for the night.

So I took my thoughts out of the warm and dry house out into the backyard (about a hour ago) and this is what happened:

I took my pole set and snapped them altogether.  I then laid out my rain-fly over the poles and connected the primary rib pole, not hard.  I then attached the first side pole to the first fly corner and tried to attach the other end to the grommet on the inside just over the first door, very very tight.  I then tried to repeat the process with the other pole, it’s pouring rain mind you.  The quarter dome’s poles are not 2 poles crossing and going corner to corner, there are 3 poles, a main rib pole, going corner to corner, then 2 slightly smaller poles that go from 1 corner, over the rib and to a grommet over the door on either side, it’s kind of weird but I guess this is a weight saving strategy.  As I connected each of the shorter poles to the door grommet, the rain-fly kept flipping in and out under tension, but I managed to finally get it together and stake out the 2 vestibule ends.

I then crawled in with the actual tent and laid it out on the grass.  The actual tent is all screen over the nylon bottom, with very large screen doors on each side, also a weight saver.  I spread out the tent and fasted each corner to the poles.  I then sat upright in the tent – out of one of the screen doors and then proceeded to clip the tent to the poles.  The clips are on the outside of the screen top, but it turned out to be pretty easy.

The hard part was un-clipping the ends of the shorter poles, fastened in the  rain-fly grommets over the doors (under tension) and trying to clip then into the grommets on top of each screen door, while sitting inside the tent.  I had to really bend down the poles to do this and was pretty worried about  snapping a pole.  But once it was done, the tent was set up pretty good and still pretty dry for all that thrashing around.

My wife came looking for me about that time and calling from the garage back door, heard my voice inside this newly erected tent in the backyard, in the pouring rain, and I could hear her thinking – WTF is this idiot doing now?

So, what’s your plan?  I’m ready to steal good ideas!

I’m sick and tired of people telling others ” you need to strip down” in your sleeping bag to stay warm.  This makes me absolutely crazy!!!  Common sense, logic, and science are completely ignored, resulting in total shit advice.

I’ll lay it all out for debate very soon!

Just back from a short weekend hike on a trail called “apple orchard” (ref: http:\\hikingupward.com)

Hike goes down from the Blue Ridge Parkway on the AT for a mile or so, then drops down the mountain for a couple of miles to the campsite on a creek.  Don’t walk too fast or you get there really soon and have a lot of laying about time.

We drove down Friday night and camped in the TJNF off a dirt road, then visited what’s called the longest foot bridge on the AT, crossing the James River.

I had a large cinnamon raisin bagel with pineapple cream cheese and folger’s coffee bags for breakfast, worked ok.

For dinner I tried something different, 3 packets of .5 cup each dehydrated mashed potatoes, weighed almost nothing, and some liptons gravy.  It was hard to simmer the gravy in the jet boil without burning, but it was done.  But the potatoes with the gravy was FANTASTIC!  and I was not hungry later.  Only problem was the bowl that comes with the jet boil would only hold 2 packets (1 cup), next time will need to use a larger plastic bowl.

We had 3 or 4 sailors on this trip and these guys were great, and absolutely hysterical!  Caleb shared his “Jack” with me at the campfire and he and Rattler swapped Chuck Norris jokes till we almost cried with laughter (you had to be there).

Squirrel had a new and lighter tent and was hiking and camping like a pro!

Squirrel almost stepped on a black rat snake, I was walking behind her…so after I cleaned out my pants we took some pictures and made a film of the snake before moving on.  We ran into Herc, who’s an amateur herpetologist, so we went back found mr. snake, Herc picked it up and we played with it for a few minutes, it secreted musk, and I got it all over my hands, yuk.

Besides Caleb, I met Rodney and son Josh BMX, also Mr. and Mrs. Rattler & Sunflower Snackalicious (NOT TRAIL NAMES :0) from me anyway.  I had hiked with Micki last year at Tinker Cliffs, this year she had new boots and no blisters, she also had Mr Sunflower, (we knew who was in charge)

From the parkway down to the camp we had to drop from 3470′ to 1600′.  For the return trip an adjoining trail took us by Apple Orchard Falls for some photo ops the back to the trail head on the parkway.

I guess I was still in pretty good shape from the Grand Canyon hike because I had no issues with the climb back to parkway, held my own, was able to march on, only took one small break and that was at the falls for our photo op. 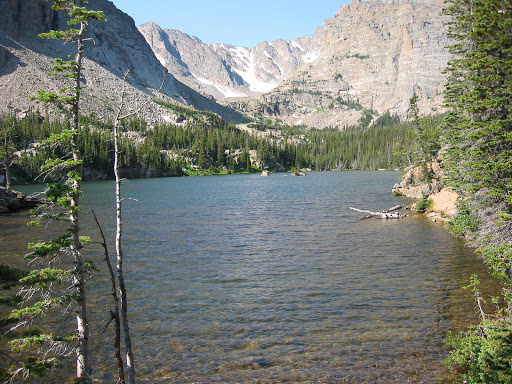 This is from Rock Mtn NP, about 6 years ago;  I was going thru my old pix and I had forgotten how beautiful it was. This was at the height of my fat phase, which I account for my altitude sickness on day 1, but was more than likely just a stupid decision to hike up to 12,500′ from the campground instead of spending a little more time acclimatizing. Lost over 30lbs since then and train a lot better.

RMNP absolutely sucks from a back packers point of view. Forget RMNP head out to one of Colorado’s wilderness areas where you can plan your own itinerary and not be stuck at one of the bull shit designated campsites!

Have reserved a steak dinner and breakfast at Phantom Ranch on the return leg.  I know, this is like cheating, ok, it is cheating.  Geardog’s wife Lisa, is taking the donkey ride down and staying 1 night at phantom, their going to sneak me into their cabin. In case you were wondering, the steak dinner in the canyon runs just under $50, ouch.

2.  Geardog and I have 2 more hikes on the horizon, Wonderland trail, cascade NP, circumnavigates Mt Rainier, 95 miles(?) 9-11 days, 1 food cache.  He’s trying to get the permits for early July.

Next up is our annual pilgrimage to Colorado, 4-Pass Loop, Maroon Bells, Aspen.  Can’t wait.

Here’s the link to photos at picasa: